When I found out I was pregnant right after Halloween, I was in the middle of training to run a 10k that was scheduled for the week of Thanksgiving. I continued my training and ran the 10k with no issues. By then, I was 13 weeks pregnant and through the first trimester. So I decided I wanted to keep running throughout this pregnancy. I wouldn’t push myself and train hard for long races, but I wanted to keep up a light running schedule (8-10 miles a week), and run a few 5k races for as long as I could. 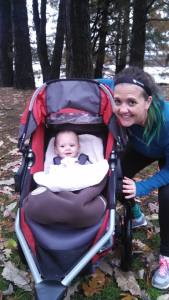 I am now 23 weeks pregnant and ran my first 5k race since then yesterday. And boy oh boy, was this event amazing! It was the Hot Chocolate 5K/15K in Seattle. It is made for chocolate lovers. And guess who is a chocolate lover? This girl, and this little baby boy in my belly! My pregnancy craving this time around has been chocolate, chocolate, and more chocolate.

Our Group – I found out about this event from our FIT4MOM group. A couple of the girls had run this race last year and were already talking about it in the fall. So about 15-20 of us signed up this year. Most of us were running or walking the 5k, two runners ran the 15k, and all of us were there for the chocolate. 🙂 We made shirts for our team to wear that had our FIT4MOM logo on the front and said “Will run for chocolate” on the back.

The Corrals – This race was different than others in that you had to submit proof of a previous race pace that you’ve done in the last two years. All the participants were then divided into corrals with the fastest runners starting the race first, the jogging paces in the middle, and the walkers starting last. There were also no strollers or dogs allowed on the route. Each corral started every three minutes until all participants had begun. This meant that the fast runners at the beginning were either done or almost done before the walkers had even began. So we all split up into our assigned corrals with plans to meet up afterwards; I was in the middle of the running/jogging corrals with a few others from my group. 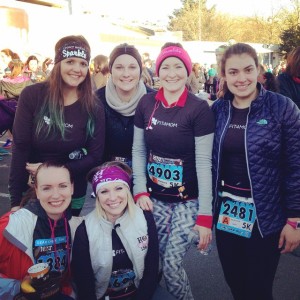 The Route – Yesterday was a beautiful Seattle morning that hinted of an early spring. But we had to get up SUPER early (4:30am) in order to get there for the 6:45am start time. So it was very cold and very dark before the race started. Then once we got on the route, it was beautiful. The sky was bright blue, the sun was shining (although it was still cold!), and the scenery was gorgeous. The route took us by the waterfront, through downtown Seattle, through the viaduct (eek!), and finished under the glorious Space Needle. If you know Seattle, you know that means it was hilly. The final 1/2 mile was actually all uphill to the finish line! Man, they made us earn that chocolate. Sorry I didn’t get any pretty pictures during the route, but we had to get this picture in the creepy viaduct. This tunnel is one earthquake away from total destruction! 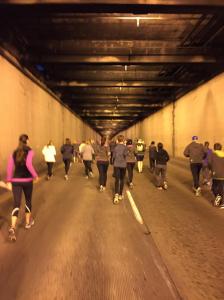 The Reward –  Oh the delicious reward. The most important part of the race bib was the piece at the bottom that said “Finisher’s Mug”. After crossing the finish line, participants turned in that piece and were given their hard-earned Finisher’s Mug. This oversized mug included a cup of hot chocolate in the middle – usually I am not a fan of hot chocolate, as I am not a fan of hot drinks in general. But this one was delicious! There was also a section filled with warm chocolate fondue, and plenty of goodies to dip in it – a banana, a rice krispie treat, pretzels, wafer cookie, etc. It was heaven in a bowl.

My Extra Bonus – After the race and the delicious reward and a trip to the merchandise tent, we all parted ways. I then met up with a friend and treated myself to a pedicure, which was wonderful after many winter weeks of neglecting my toes. During this whole morning of being out and about for me-time, my husband was home with Zara having a daddy-daughter morning. I had left so early in the morning while they were both sleeping. So while I was gone, he had gotten her up, fed her breakfast, and took her for a walk to our neighborhood park. He sent me this picture before I got home, which just warmed my heart.

I was then home by noon and we enjoyed the rest of the day together. This weekend is also when Zara flipped the switch to full on walking, and she’s so quick and fearless that she’s practically already running. And with all the amazing chocolate treats this weekend, baby boy is also flipping and kicking around, already trying to keep up with his big sister! I think we’ve got some future runners here! 🙂

3 thoughts on “Will run for chocolate!”

Thanks for stopping by! 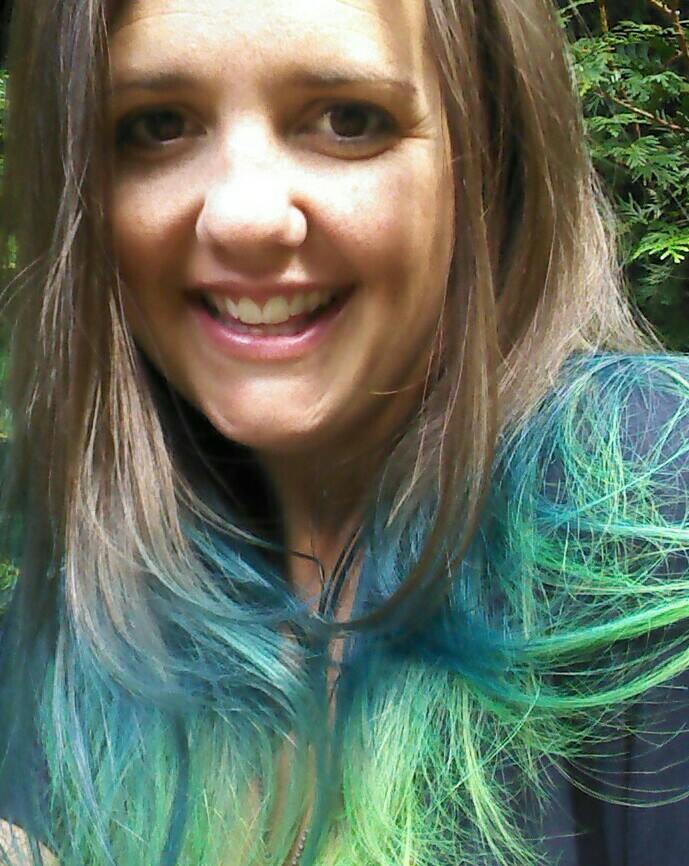 My husband and best friend, Jeremy. My smart and thoughtful stepson, Hayden (age 12). My hilarious and playful daughter, Zara (age 2). And my sweet and determined son, Gavin (now 7 months)! These people make up my awesome family - they are my inspiration, my loves, and my buddies!